Hi! I’m Sophie Flynn, the new Treasure Trove Unit Officer. I wanted to take this opportunity to introduce myself to finders and colleagues in Scotland, so that you have a little idea of what brought me to the Treasure Trove Unit (TTU) and to National Museums Scotland (NMS).

Until January 2021, I worked at Colchester and Ipswich Museums as the Essex Finds Liaison Officer with the Portable Antiquities Scheme (PAS). Before this I studied for a BA in Archaeology and Anthropology, and an MSc in Palaeoanthropology and Palaeolithic Archaeology. I had previously volunteered with the PAS both before and after university and found that I had a real passion for public archaeology and engaging members of the public with our shared heritage.

During my time in Essex, I was lucky enough to see some truly incredible artefacts and meet some really inspiring and committed finders and museum professionals. I know that Scotland will be the same and look forward to getting stuck in and exploring the rich archaeology and history of this amazing place!

I have been lucky to be able to get to know artefacts from the broadest possible range of British history and prehistory. I learned quickly that I have particular fondness for Medieval finger rings and continue to be amazed at just how beautiful and intricate their craftsmanship is! Take a look below to see some of my highlighted finds that were reported by members of the public. 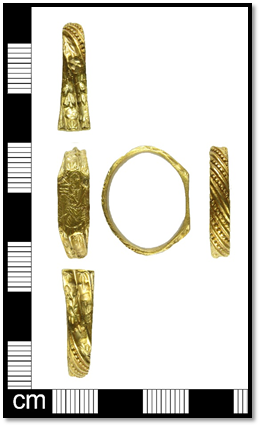 This beautiful Medieval finger ring was reported to me in 2017. It was processed as ‘Treasure’ (under the Treasure Act 1996 in England, Wales and Northern Ireland) and was acquired by Colchester and Ipswich Museum Service. The female figure engraved on the ring is thought to be either St Barbara or perhaps Mary Magdalen. There is still some mystery as to who the figure represents, and other iconographic finger rings with similar designs vary in their identification of the female saint.

Devotional jewellery like this was very popular during the later Medieval period (c. 1440-1530 AD), and rings like this were often bought on pilgrimages or at cathedrals. Wearing the engraved images of these saints was not only devotional. Many viewed these items as ‘magical’ protection charms. St Barbara, for example, was thought to have the power to prevent sudden death, particularly death by storm and lightning! The link to the PAS record can be found here: https://finds.org.uk/database/artefacts/record/id/851445

These rings are also found in Scotland, and a wonderful exa 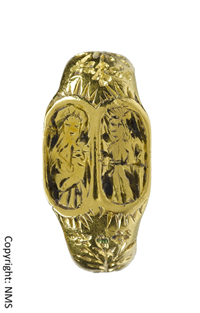 mple of an even more ornate gold iconographic finger ring resides in the collection of National Museums Scotland.

This example was found at Tantallon Castle, North Berwick, and dates to the mid 15th century AD. The ring depicts both a male and a female saint in two ovals defining the bezel. The ring is decorated with enamel and floral engravings. The link to the record on the NMS collections database can be found here: https://www.nms.ac.uk/explore-our-collections/collection-search-results/finger-ring/29107

Another of my favourite Medieval ring types are the hexagonal-bezel type, which often feature incised decoration on the bands, and a polished sapphire gem setting. The incised designs on the band often feature crosses and small punched annulets. One such ring was reported to me in Essex in 2017, and was acquired by Epping Forest District Museum following a successful community funding drive. It’s known as the ‘Willingale Treasure’ and is still on display at the museum today.

The PAS record for this ring can be found here: 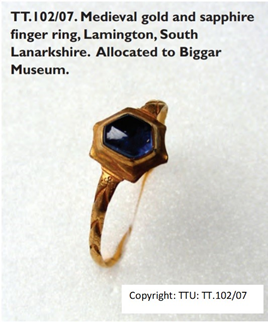 This ring type is relatively well known in both museum collections and as chance finds from across Britain, with Scotland being no exception. They date from the 13th -14th centuries. A lovely example was processed by TT and allocated to Biggar Museum. Like the incised figures of saints in the rings mentioned above, wearing rings with specific gemstones was also thought to imbue a sort of ‘magical’ or protective property. Sapphire for instance, was thought to invoke pious thoughts in the wearer, and was commonly used in finger rings for members of the clergy.

Though I appreciate all artefacts across all periods of British history and prehistory, it doesn’t mean that my love of all things stone has gone away! Items from these periods are still some of my favourite! I’m excited to investigate the unique aspects of Scottish prehistory, and always appreciate an email about a good flint find, so please sent them my way!

Scotland’s prehistory is so rich, and having done a little virtual digging into some local museum collections, I came across the following artefacts that have made me all the more excited to be working here!

The archaeological record of the North and North East of Scotland sees an abundance of Neolithic carved stone balls, like this exquisite example in the NMS collections from Towie, Aberdeenshire. Whilst their exact use requires many educated guesses, their status as items of cultural importance is certain. The carvings on many of the stones feature spirals, lines and circles; designs which also frequent stones from Neolithic passage tombs and monuments. These designs clearly imbued meaning and purpose by their creators. Though there are likely design inspirations taken from similar artefacts and motifs in Ireland and even France, the nature of these knobbed carved balls appears to be essentially Scottish in origin. 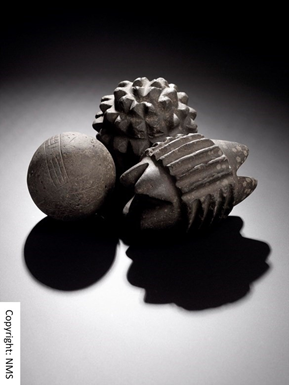 Despite there being anything from around 450 – 520 of these items known, there are only a small minority from outside of Scotland, with the vast majority of them being found north of the Firth of Forth, mostly concentrated in Aberdeenshire. Dr Alison Sheridan presented a wonderful lecture at the 2020 Rhind Lecture Series from the Society of Antiquaries of Scotland on carved stone balls, focusing on the Orkney examples. You can watch the lecture (as well as the others in the Rhind series) for free here:

The TT Unit have seen a number of examples throughout the years, and continue to allocate them to Museum Services around Scotland. They are important artefacts, and each new find or rediscovered example should be brought to the attention of the Treasure Trove Unit so that our picture of their manufacture, uses and distribution can be more fully fleshed out. 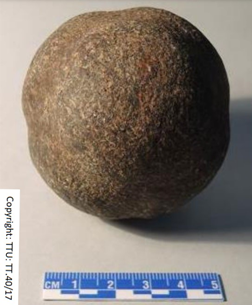 This carved stone ball (TT.40/17) was found in North Lanarkshire and was allocated to The Hunterian Museum. 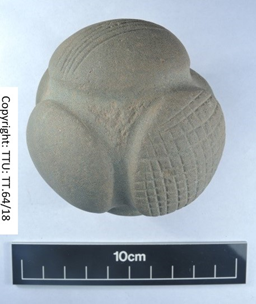 This example (TT.64/18) was claimed as Treasure Trove in 2018 and assigned to Perth Museum and Art Gallery, following a hugely successful community crowd funding campaign by the Museum. It was made from a fine grained igneous stone and found near Sheriffmuir. It is unusual amongst the other carved stones in Perth’s collections, in that two of the raised knobs are incised with linear and hatched carvings. 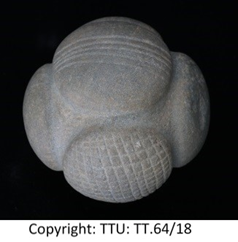 Dr Anderson-Whymark, NMS’ Curator of Prehistory notes that this examples is ‘exceptionally fine’ with less than 50 of such highly decorated examples known from the record. Dr Whymark shared his 3D imaging of the amazing artefact, which can be found here: https://sketchfab.com/3d-models/neolithic-carved-stone-ball-sheriffmuir-46453999e6fb4a87928fcc02a29ead9e

A link to Dr Anderson-Whymark’s 3D models of the other carved balls in NMS collections can be found here: https://sketchfab.com/3d-models/neolithic-carved-stone-balls-scotland-d37f63264788431fbc86e0d1def34cc7 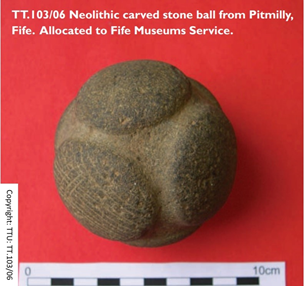 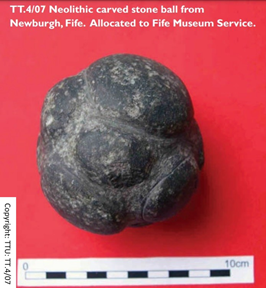 Other museums also hold similar artefacts, including those with examples on display, such as Elgin Museum.

To wrap up some of my highlighted finds, I was searching the NMS online collections and came across this beautiful example of a possibly Mesolithic axe.  What’s odd is that it’s findspot is recorded as Wickford, Essex! It seems I can’t escape those Essex flints! (Not that I’d want to, they are lovely!)

It was common, particularly during the 1 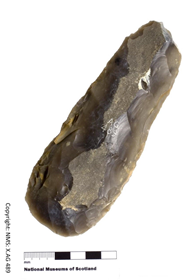 9th century, for lithic artefacts, especially handaxes, to end up in collections far from their original findspots. They were often collected by antiquarians with a personal interest in them, often for their own private collections, before being donated to local museums in their own area. In fact, much of the earlier Palaeolithic material known from Scottish museum collections derive from elsewhere; Scotland having a very scarce record of Palaeolithic archaeology due to lack of evidence that was damaged or destroyed through mass glaciation of the landscape.

If you want to learn more about what we do at the Treasure Trove Unit, as well as your legal duties under Treasure Trove law, please visit https://treasuretrovescotland.co.uk/information/

I know that 2020 has been a shockingly hard year for everyone, and certainly the beginning of 2021 looks to be just as challenging. However, even though times are strange right now, please know that Team Treasure Trove are still working hard to make sure important artefacts are protected and cared for by public museums across the country. I am so excited to get to work here in Scotland, and look forward to meeting many new faces and learning all sorts of new things! 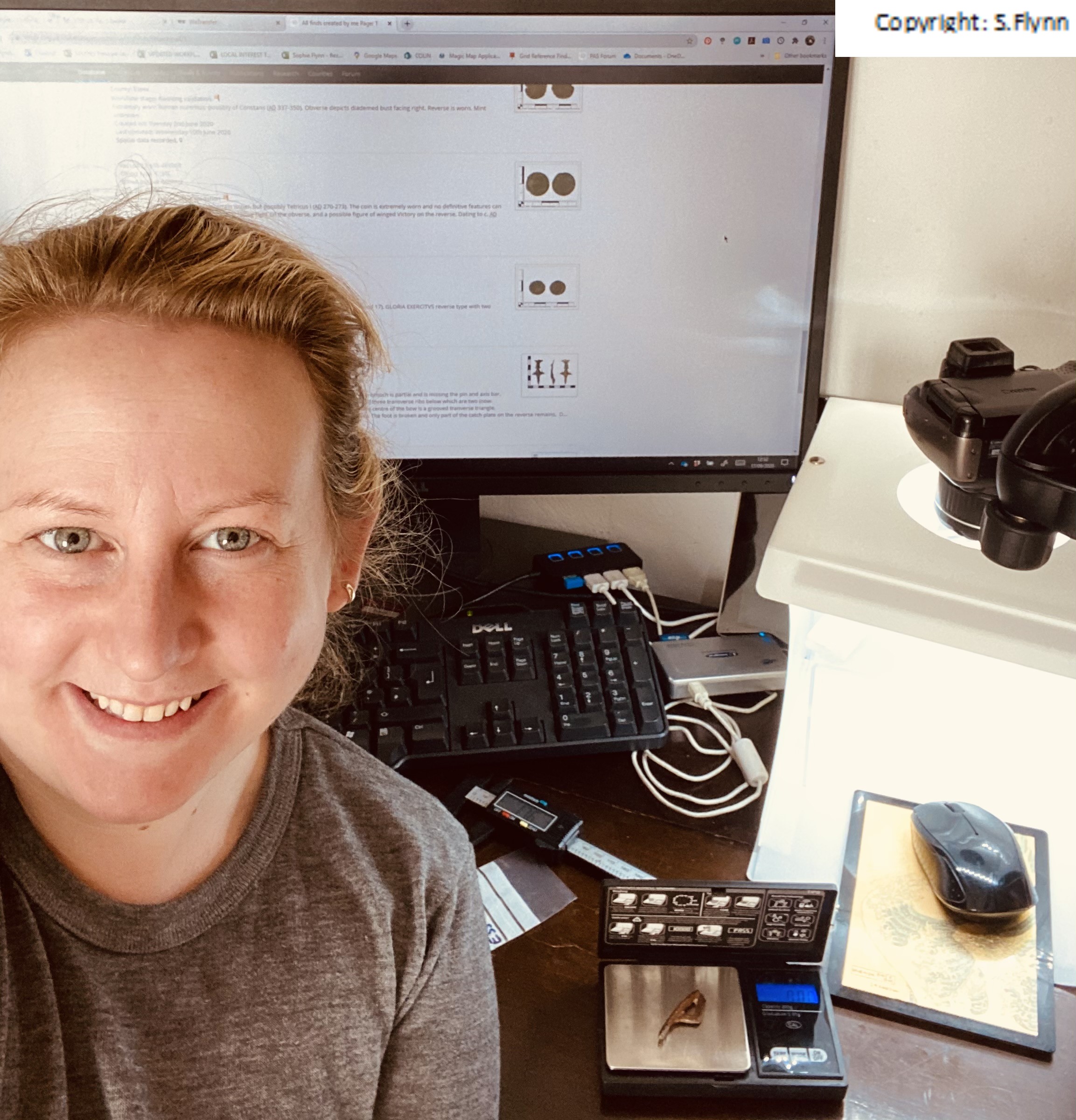