The SAFAP is an independent panel of heritage experts and lay members responsible for advising the Queen’s and Lord Treasurer’s Remembrancer (QLTR) to which museum an object should be allocated and on the level of ex gratia award for the finder. The panel usually meets three times a year.

Should two or more museums apply for the same case, the panel also decide to which museum the object should be allocated by considering the case made by each applicant against the criteria in the Code of Practice.

Membership of SAFAP is drawn from a variety of backgrounds in the heritage and archaeology sector. The chair, three professional and one lay member are appointed following advertisement and interview.  Other members represent Museums and Galleries Scotland, the National Museums Scotland and Historic Environment Scotland. Their job is to give an impartial perspective, independent of any one museum or institution. Should any SAFAP member come from an institution involved in a case, they will absent themselves from the case under discussion and play no part in the recommendation of the Panel.

Recommendations of SAFAP are passed to the QLTR who ultimately makes the decision on valuation and allocation.

Dr Evelyn Silber is Hon. Senior Fellow in the History of Art at the University of Glasgow. She is a former Director of The Hunterian, University of Glasgow, also of Leeds Museums and Galleries, and Assistant Director at Birmingham Museums and Galleries. From 2006-2009 she was a member of the Historic Environment Advisory Council for Scotland. A historian and art historian by training, originally specialising in medieval manuscript illumination, she has considerable experience of the issues around the acquisition, conservation and presentation of archaeological and numismatic material and the care and presentation of medieval sites for the enjoyment and understanding of the public. Evelyn has lived in Glasgow for 20 years and is involved in several local heritage and cultural tourism projects.

Jacob O’Sullivan is the Museums Galleries Scotland (MGS) representative on the panel. MGS is the National Development Body for the museum sector in Scotland, working collaboratively to invest in and develop a sustainable museum and galleries sector for Scotland, in line with the aims of ‘Going Further: The National Strategy for Scotland’s Museums and Galleries’. As Collections and Engagement Manager, Jacob works with museums across Scotland to support collections management and engagement with collections. Prior to working at MGS, Jacob was Curator of the Large Objects collections at the Highland Folk Museum, Newtonmore. He has also worked with National Museums Northern Ireland and Cregneash Folk Museum in the Isle of Man (where he is from). He studied at Queen’s University Belfast, and the University of Ulster.

Please check back for updated information.

Stuart Allan is Keeper of Scottish History & Archaeology at National Museums Scotland, head of a department of specialist curators whose expertise covers the material culture of Scotland from around 13,000 BC to the present day.  His own research and publication has focused on modern military material culture, organisational culture, and on the relationship between war, military service and representations of Scotland during the late 18th and early 19th centuries.

Stuart has been with National Museums Scotland since 2000, and has earlier career experience with regional and independent museums. He is a member of the Joint Advisory Committee of the Faculty of Advocates Abbotsford Collection Trust and the Abbotsford Trust; and an honorary adviser, military collections, for the National Trust for Scotland. 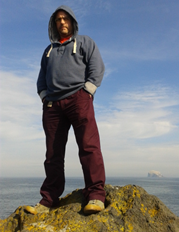 Mark is currently collections officer with Culture Perth & Kinross based at Perth Museum & Art Gallery, where he is primarily responsible for the archaeology collection. His work in that area is currently focused on Perth’s new museum project.

Mark studied at the universities of Sheffield (achieving a PhD) and Leicester and is a member of several professional bodies and interest groups (including the Chartered Institute for Archaeologists, the Societies of Antiquaries in London and Scotland and the European Association of Archaeologists) and has held research fellowships with the Universities of Glasgow, Sheffield and the Highlands & Islands. His research interests focus mainly on medieval material culture, on which he has published widely.

Paul Macdonald is an Edinburgh based custom sword and knife-maker and historical fencing master.

His research is focused on Scottish and European arms and armour and historical martial arts, exploring the cultural developments, construction and craftsmanship of various arms alongside combative methods and pedagogy. He maintains close ties with museums and historical and military organisations through research and public presentations.

Paul has a keen interest in metal detecting, is a member of the Scottish Detector Club and Chairman of battlefield archaeology group, Conflicts of Interest.

Dr Mary MacLeod Rivett is casework officer with Historic Environment Scotland. She worked and travelled widely as a field archaeologist before moving to the Outer Hebrides as Western Isles Archaeologist, and then as an archaeological consultant, and part-time lecturer in archaeology at the University of the Highlands and Islands.

Peter Yeoman has worked in Scottish archaeology for more than 40 years, directing major excavations at Edinburgh Castle and on the Isle of May, while also writing a number of books. It was the discovery of the burial of a medieval pilgrim to Compostela at the May monastery which prompted him to write his book on Pilgrimage in Medieval Scotland. Through the 1990’s he was Council Archaeologist for Fife, before joining Historic Scotland where Peter was responsible for developing archaeology and research across the estate of properties in care. He led research programmes which underpinned major interpretation projects at James V’s Renaissance Palace within Stirling Castle, Whithorn Priory, St Vigeans Pictish stones, Iona Abbey, and Edinburgh Castle. He now works freelance, pursuing his own research interests and leading archaeology tours at home and abroad.

His current projects include publishing a Corpus of Pilgrim Badges in Scotland, as well as preparing a review of the Museum Presentation of Early Medieval Carved Stones. Peter is an Associate of the Centre for Environment, Heritage and Policy in the University of Stirling. His most recent publications include a paper in PSAS 146 on A house-shaped shrine in the oldest portrait of St Columba in Cod Sang 555, and a chapter on Pilgrimage Archaeology in the Handbook of Late Medieval Archaeology of Britain (OUP 2018).